I am a bit of a hoarder of cookbooks, finding it difficult to pass by the aisle in the bookshop. My mantra is you can never have too many, and since the start of my cake business I have now amassed cake books in equal measure to my general cooking books. I am particularly drawn to those that have something a little bit different, be it in style or in particular, flavours.

I discovered Henrietta Inman through her Instagram account, which showcases her cakes and desserts decorated in a colourful array of pretty flowers and berries. All of her cakes and bakes are made free from wheat, dairy and refined sugar. Her book ‘Clean Cakes’ was released earlier this year and while the name initially held me back (I don’t believe in classifying food as ‘clean’ or otherwise!), the delicious flavour combinations showcased on her blog left me too tempted!

The book gives an excellent introduction into alternative ingredients to make your bakes ‘free-from’ and is subsequently divided into chapters on cakes; muffins, loaves and breads; biscuits, brownies and bars; tarts and pies; raw desserts; and finally, chocolates and little treats.

I was most tempted by the Courgette, Basil, Lime and Pistachio Cake with Avocado Lime Cream and Raspberry Jam. Yes, you did read all those ingredients together! It was an unusual combination which I tested on some dinner party guests. Although the recipe denotes making layers I made a single larger cake for simplicity.  Made with coconut flour and sugar, the cake was deliciously moist and incredibly nutty from the ground pistachio. The icing was a combination of avocado, lime juice, coconut yogurt and coconut sugar. Underneath the icing was a layer of raspberry jam. This was an unusual addition I thought, but actually added an amazing dimension to the final flavour.  To say the cake tasted divine was an understatement…it got a resounding thumbs up from my dinner party guests and the flavours and ingredients became a lovely talking point too!

Other recipes in the book which caught my eye were the savoury Roasted Root Vegetable Tarts with Spiced Sesame Crust, Purple Haze Loaf with Super-Berry Cashew Yogurt, and the Chocolate Hazelnut Torte with Honey Praline Ganache.

I did find that some recipes in the book had ingredients that were not readily available (despite me living in a capital city well-served by delis and speciality shops). Items such as palmyra nectar (which I had never heard of before!) and teff flour were not available in my local health food shop. However I did substitute honey for the coconut sugar in the icing of the Courgette cake and I imagine other simple substitutions are also possible.

For a baker interested in free-from cakes and treats and who likes to source and experiment with different ingredients I would highly recommend this book! 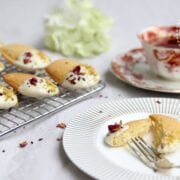 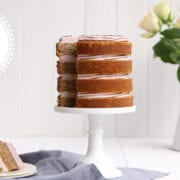 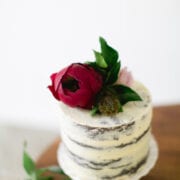 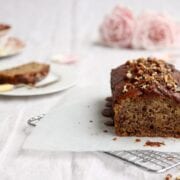