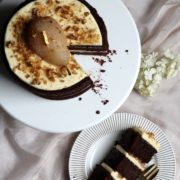 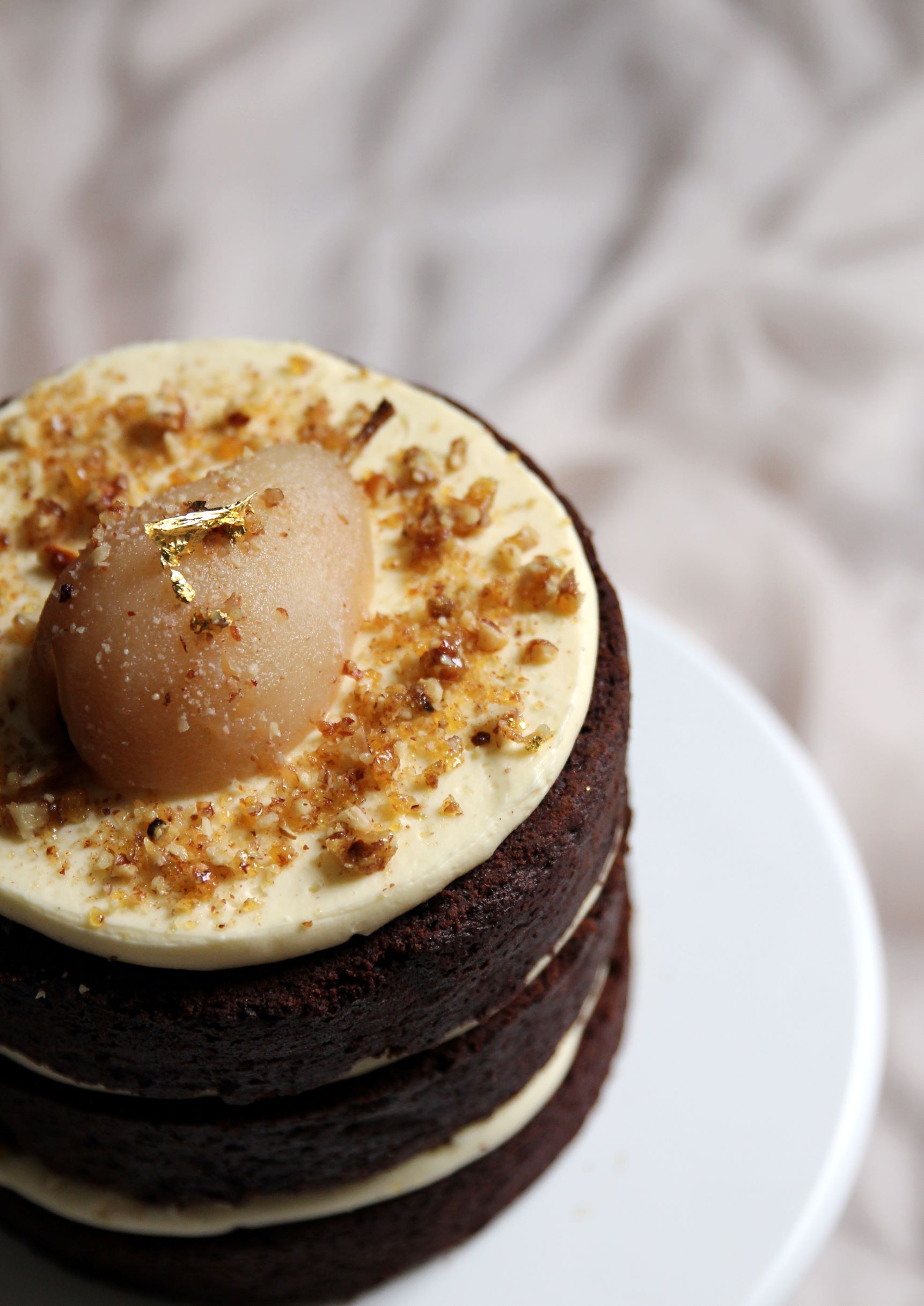 Winter months and their associated festivities bring with them a desire to cosy up indoors with woollen jumpers and log fires, while our palates turn from light and fresh summer fare to rich and aromatic flavours. This recipe for Chocolate Ginger Cake with Chai Buttercream, Chai Poached Pear and Pecan Praline is inspired by those warm and spicy scents and flavours of winter.

This recipe was originally created in 2017 for a feature in American Cake Decorating magazine and it subsequently was featured in The Taste.ie. It is such a good seasonal cake which I have made many times. I thought it was time that I shared it directly with my followers for you to enjoy too! 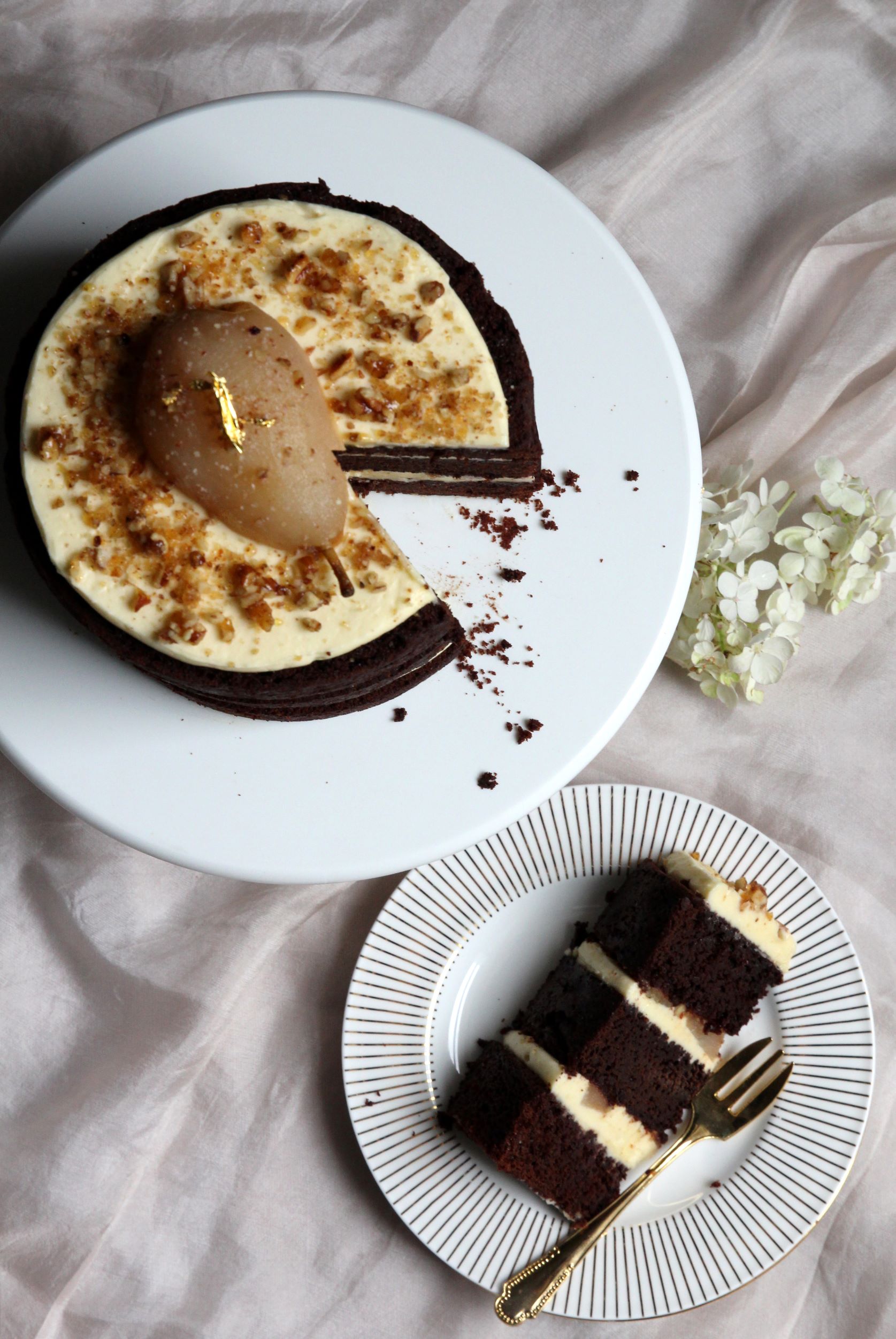 The chocolate ginger cake is deliciously light and moist, with the ginger adding just the right amount of heat to give a little winter kick, without being overbearing for those who are not so inclined towards ginger.

Chai is a spiced milk tea from India, with the spices used varying from region to region but generally including the heady mix of cinnamon, ginger, cloves, cardamom and pepper, a perfect spicy compliment to the ginger of the chocolate cake. I have introduced the chai flavour with a flavoured butter in the buttercream icing, and also in the chai poached pears. Chocolate and pear is a match made in heaven and the pears are a beautifully sweet and fresh addition to this cake.

The final flourish is the pecan praline, adding a little crunch and extra seasonal decadence! 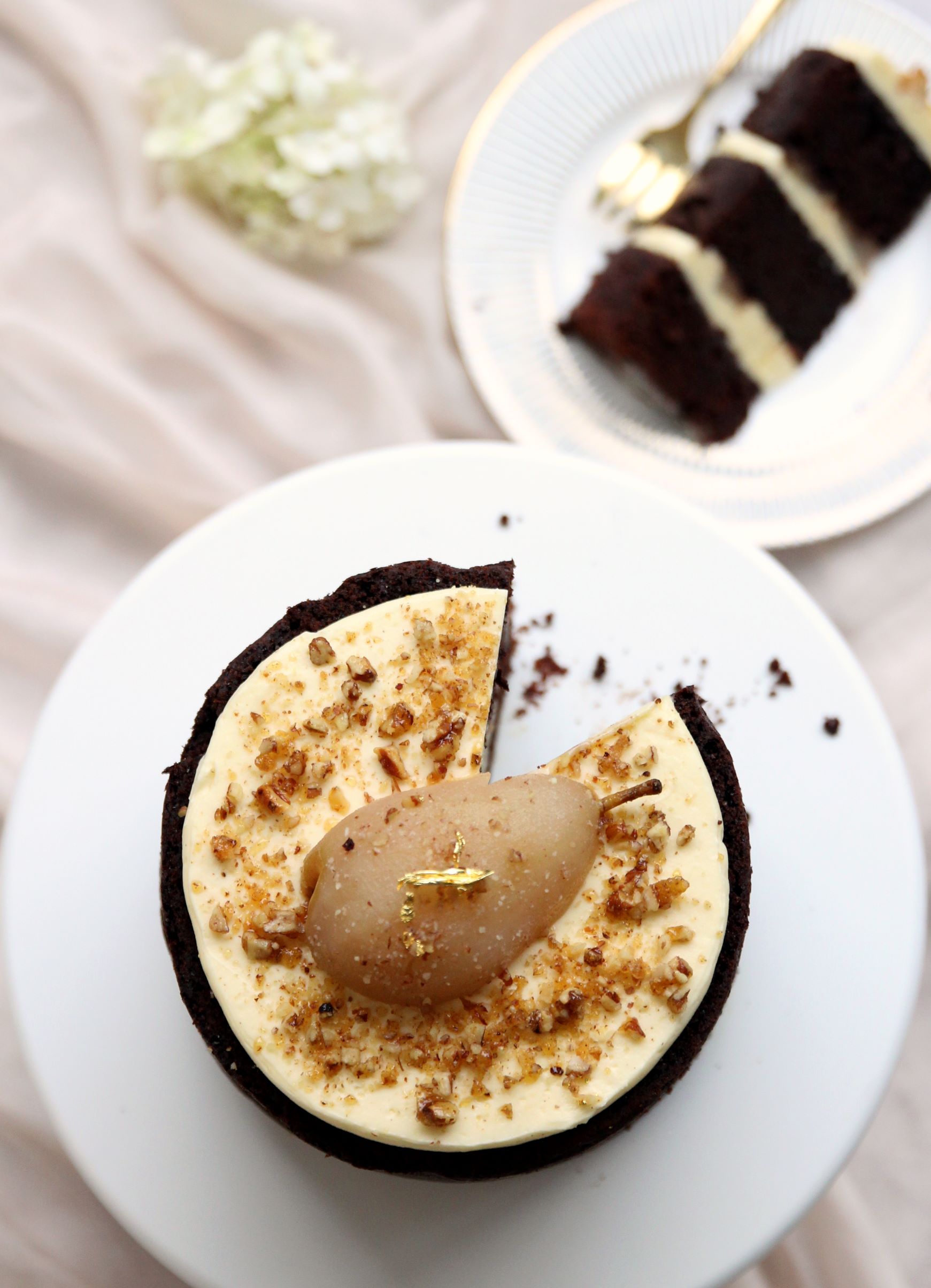 Decorated with a half poached pear, candied pecans and a little gold leaf this cake is a little bit special and would make a delectable centrepiece dessert for seasonal gatherings. Much can be made in advance in preparation for entertaining: un-iced the cake keeps well in an airtight container for up to a week while the buttercream can likewise be made in advance and stored in the fridge. Once assembled it can be wrapped tightly in cling film and kept in the fridge for 1-2 days…..if any lasts that long!

I hope you enjoy this cake, do tag us on social media @covecakedesign with your creations! 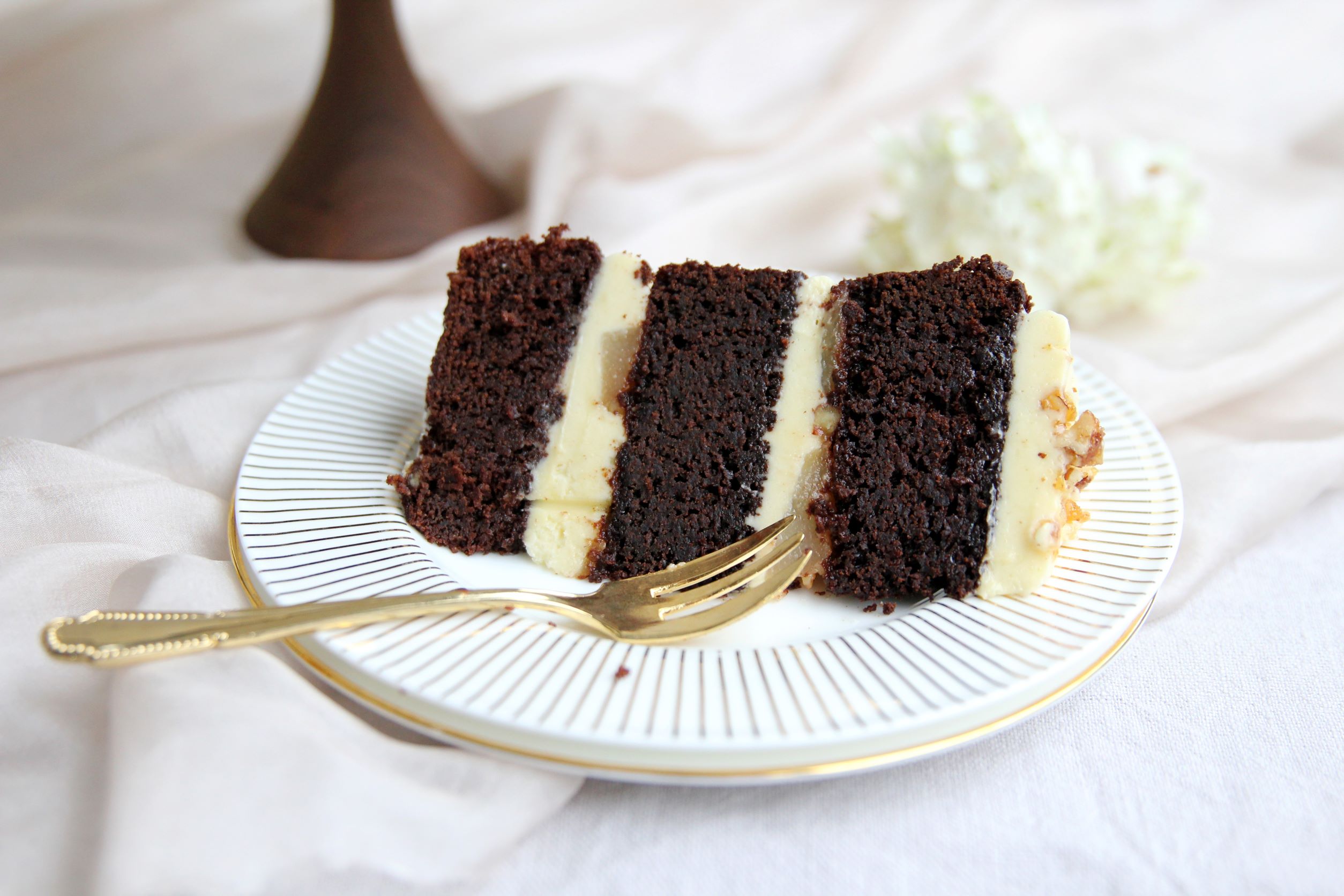 Ingredients for the Chocolate Ginger Cake:

Ingredients for the Chai Poached Pears

Ingredients for the Pecan Praline 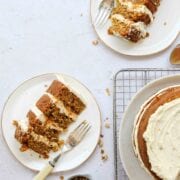 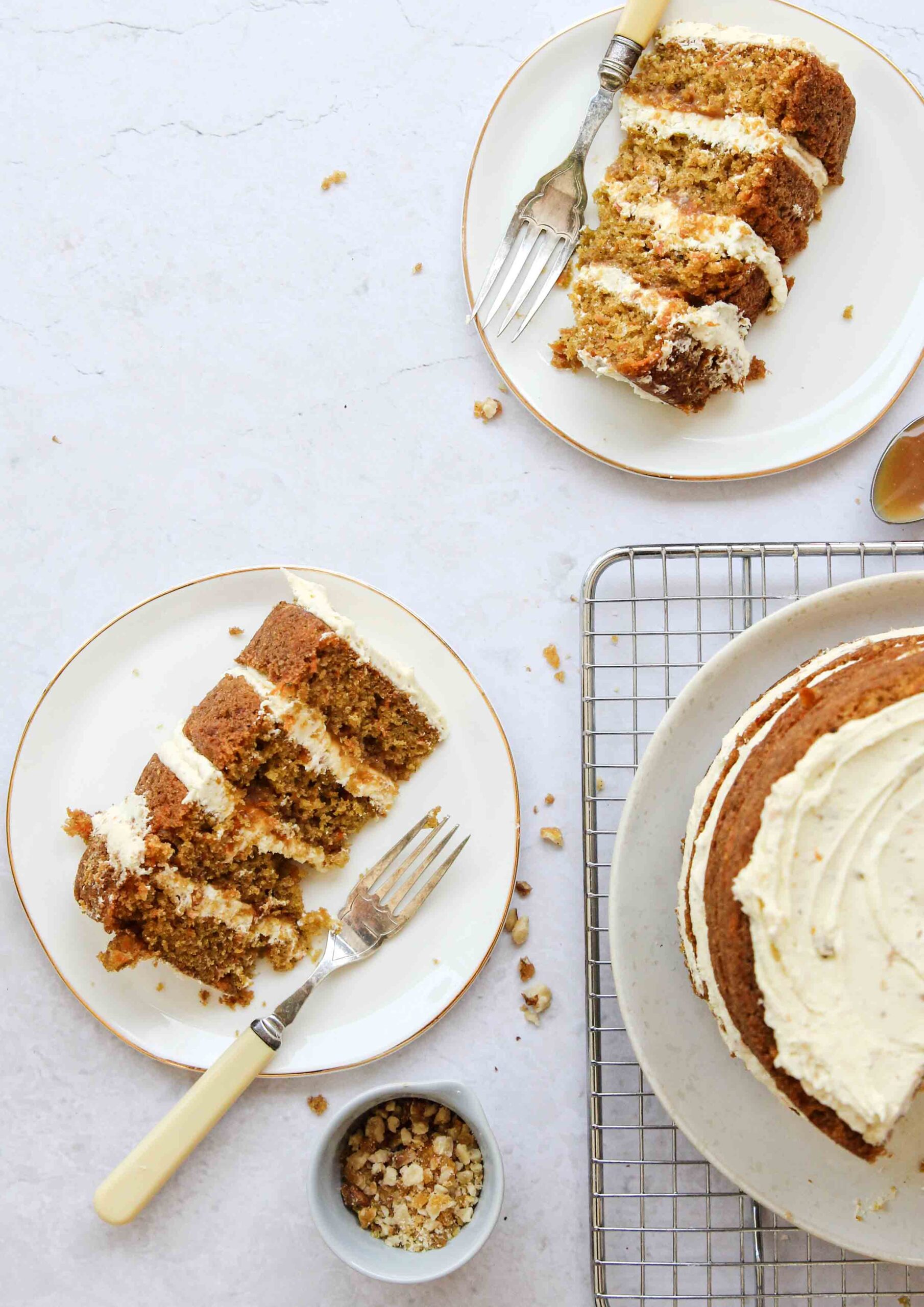 Carrot cake is a definite classic and a flavour that I adore. We actually had carrot cake as one of the tiers in our wedding cake many years ago. Despite my love for carrot cake, I haven’t actually made it for a long time. I was delighted to revisit it recently however in the creation of this comforting layer cake recipe which I am so pleased to share with you.

This carrot cake recipe is one that I had been testing out for my ebook, Layer Cakes The Essential Collection. It didn’t however make the final edit as the book was focused on cakes that can be cut neatly into finger portions, something which is required for wedding and celebration cakes. Carrot cake recipes like this one tend to be a little crumbly due to their oil based structure and grated carrot pieces. This cake is hence not particularly suited to cutting into neat finger slices, but is however especially delicious and very much worth sharing! 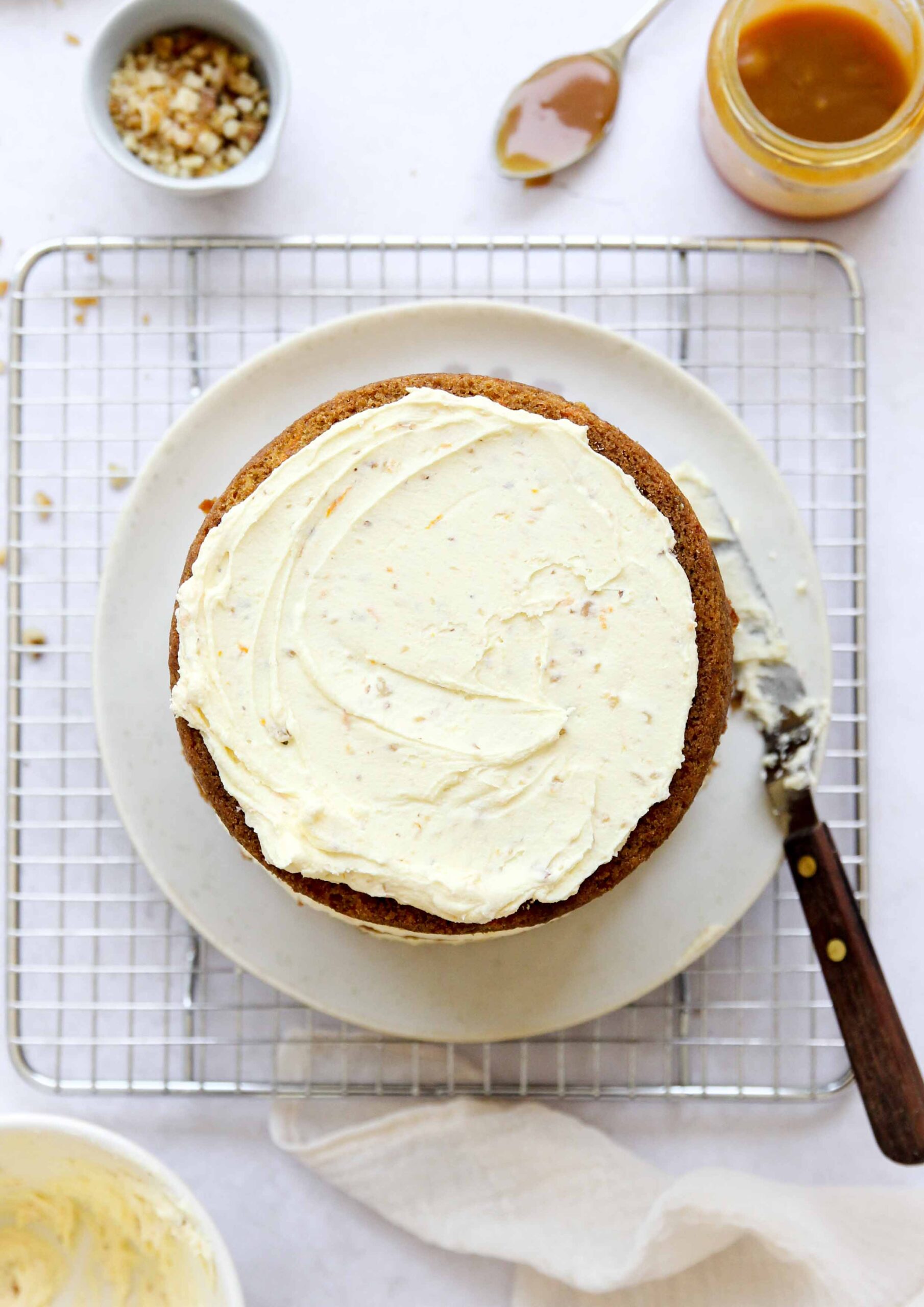 This is a traditional carrot cake recipe with oil, brown sugar and aromatic spices such as cardamom and cinnamon. I have paired the cake with an orange and walnut praline buttercream and delicious thyme caramel. The thyme caramel is my favourite element in the recipe, adding a little bit of a decadent flavour twist.  I love using herbs in baking.  Thyme is the perfect partner for carrots in savoury dishes, and translates equally well as a pairing for a cake. You may have a little extra caramel from the quantity in the recipe which can be drizzled over the top or served in a jug with the cake.

Feel free to make your own variations too, other nuts such as pecan or pistachio would make great substitutions for the walnut for example. I have specified baking in two 6″ tins and cutting each layer in half horizontally to create a 4 layer cake, you could also bake in two 8″ tins for a 2 layer cake.

I hope you enjoy this cake, do tag us on social media @covecakedesign with your creations! 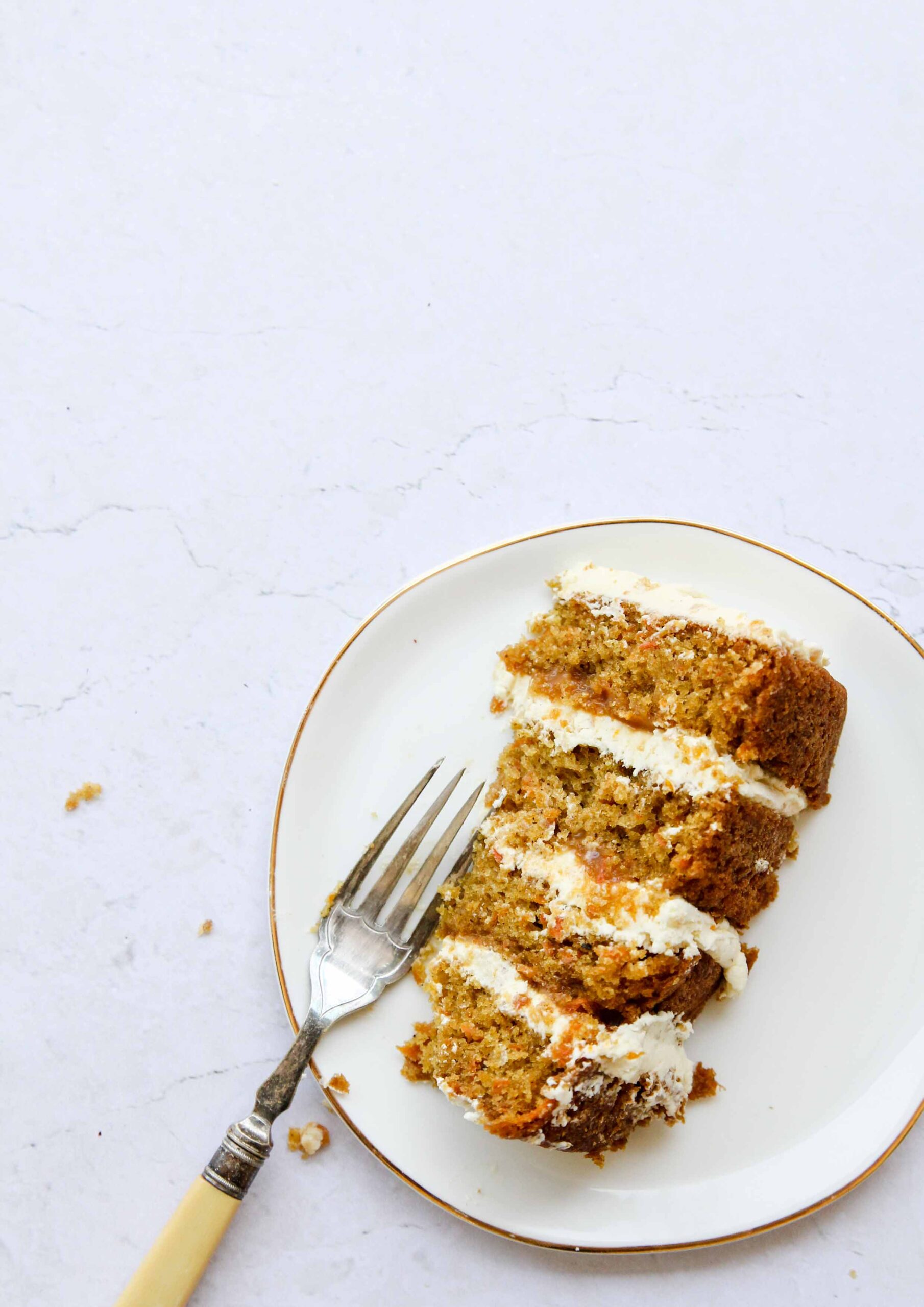 Ingredients for the Cake:

Ingredients for the Walnut Praline

Ingredients for the Buttercream Icing 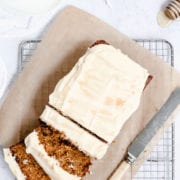 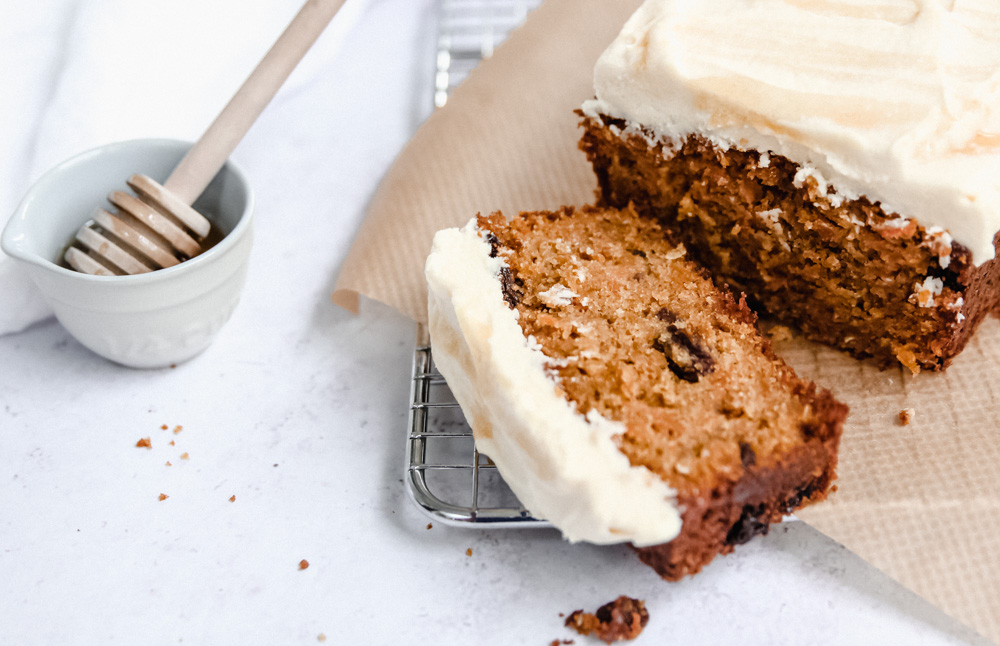 I have always loved carrot cake (I even had it as one tier of our wedding cake!). I tend to nowadays veer towards flavours that are new and interesting but there are times when the classics are called for and comforting. With the global shutdown for coronavirus currently confining us to our homes and lending an air of anxiety to our daily lives, I decided to make a classic carrot loaf cake (with a twist of course!) for an Easter treat. 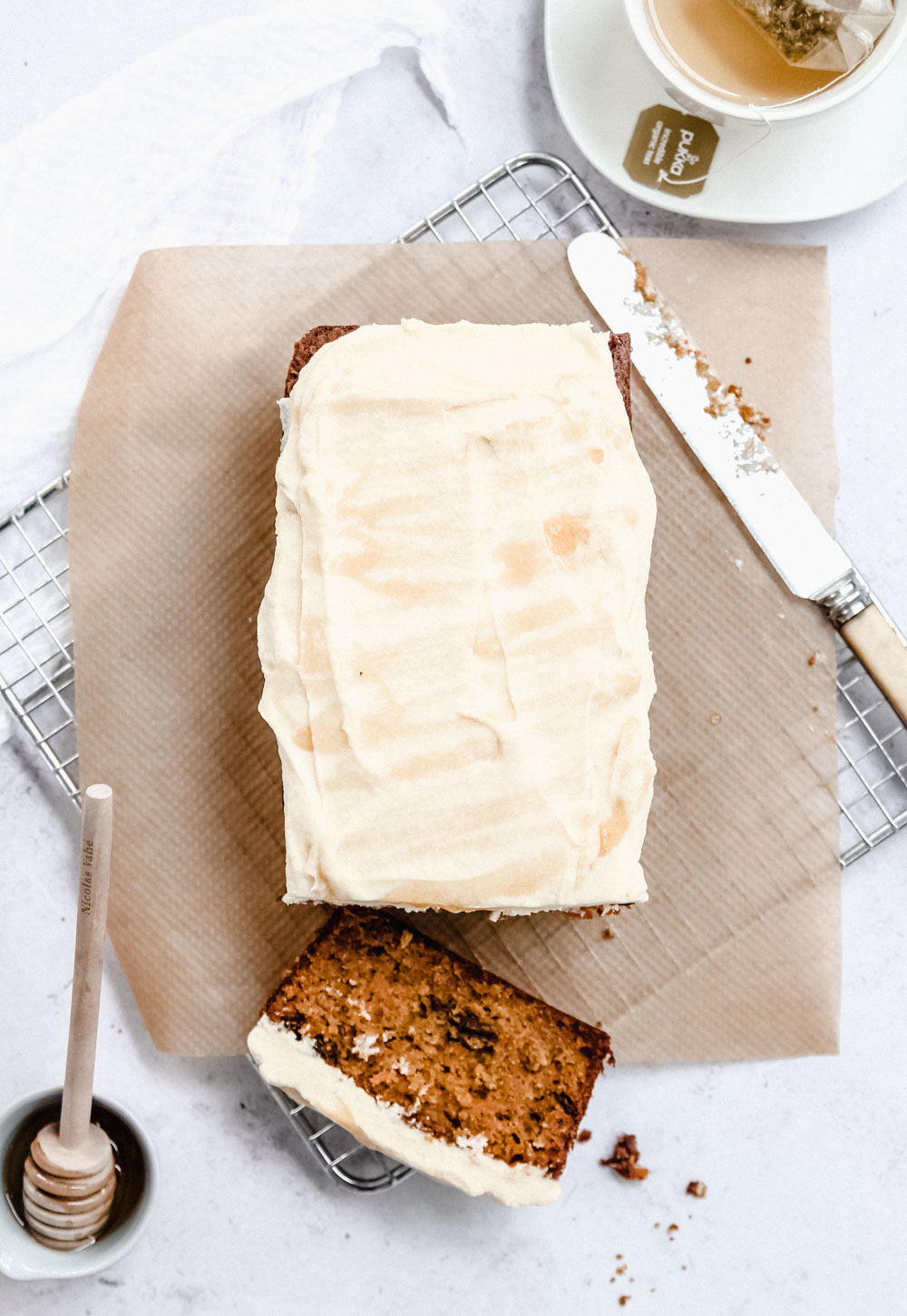 The recipe is based on standard carrot loaves, using oil instead of butter and brown sugar for depth of flavour. I used half plain and half wholemeal flour, but all plain flour will work too. I also used a mix of dark soft brown sugar and caster sugar, but for this type of rustic cake I think it is fine to play fast and loose with whatever sugar you have (espeically given the current shopping restrictions too!).  Cinnamon and mixed spice are typical additions to carrot cake, but I chose to add some cardamom too for an extra layer of flavour.

Burnt honey was something I came across in my browsing of recipes and was a bit of a revelation! If you have a really good honey perhaps with citrus flavour this would work beautifully. I only had a standard honey in my cupboard which is perfectly fine too. The bicarbonate of soda aids in the caramelisation of the honey. The recipe makes extra honey but use this can be kept and used in any recipe or situation you use honey. If you don’t want to make burnt honey a little plain honey or as an alternative some citrus zest would also work well in the icing. 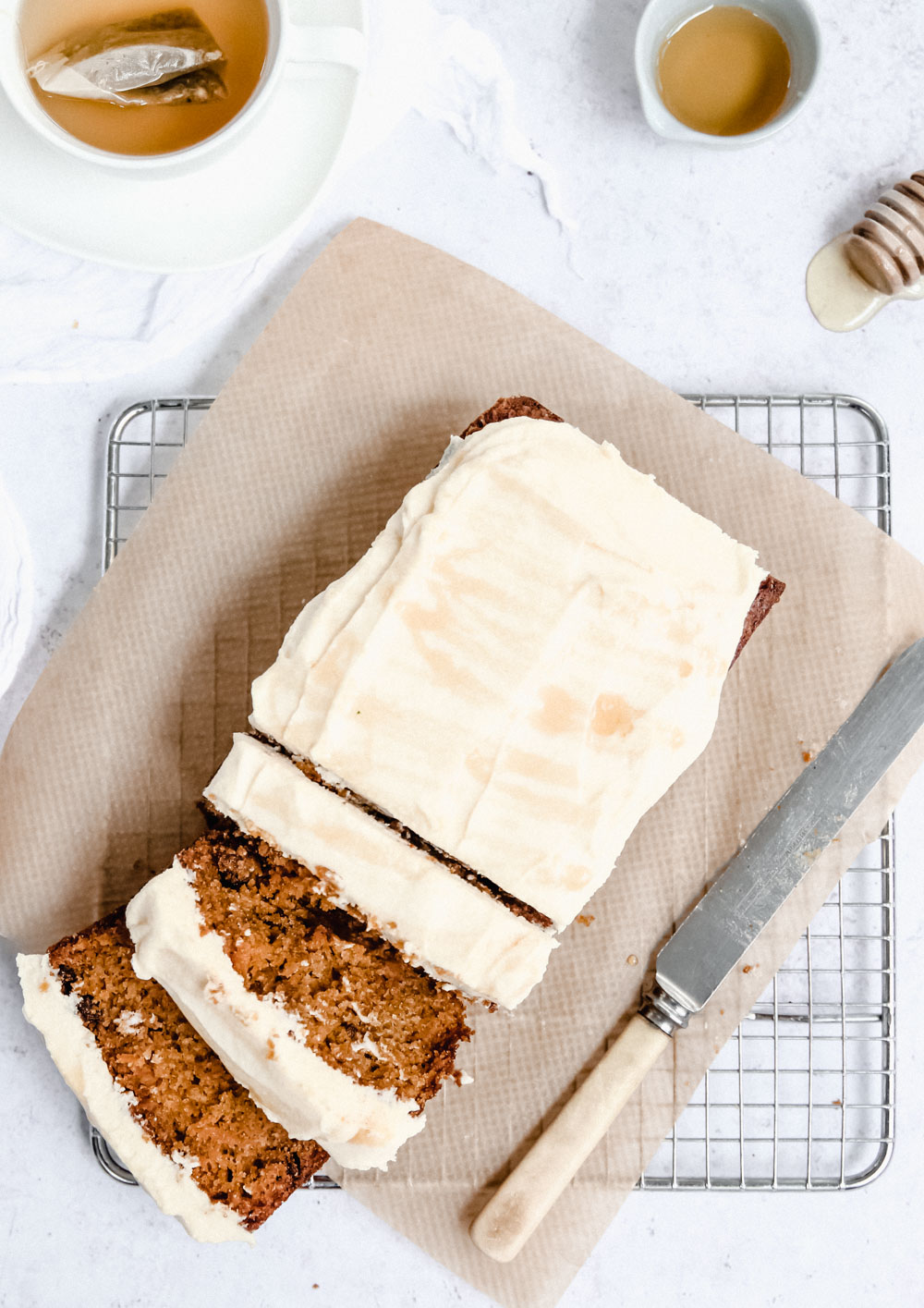 Ingredients for the Cake:

For the Cream Cheese Icing :